Join Netgalley -as I have done- set up a profile and start requesting FREE e books to your pc and/or kindle. It’s been a fantastic resource for me. In exchange you post a review – and it can be brief – it doesn’t have to be an epic essay – on amazon/goodreads or your blog or anywhere really- to share your opinion of the book.

So- onto how to get a free copy of Stephanie Ellis’ latest release from indie publisher Silver Shamrock-https://www.silvershamrockpublishing.com/ 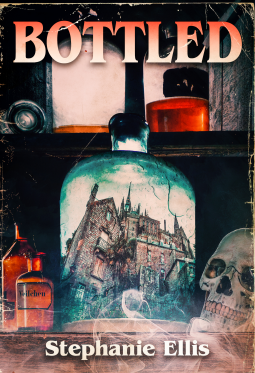 The house was his, an unwanted and unwelcome inheritance. As a child, Tyler Torrence spent many miserable hours beneath its roof, hating his grandfather and the man’s housekeeper, Mrs. Waites. His only escape during those visits had been via the impossible bottles created by his granddad; bottles holding miniature worlds in which he could lose himself for hours. Sometimes however, he sensed something else living in the house and in the bottles and when he returned home, he took the nightmares with him.

Now an adult, Tyler decides one last visit can do no harm, allow him to finally shake off his nightmares. The bottles however, are waiting—and so is Mrs. Waites. As both house and bottles gradually yield up their secrets, it is made clear to Tyler what is expected of him and what will happen should he fail.Is Tyler master or servant of the house?